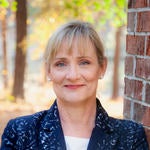 Anna Pollock is a native of Fort Mill, South Carolina and a graduate summa cum laude from Converse College in Spartanburg, South Carolina, where she earned a Bachelor's Degree in Political Science and in French in 1986.  She then attended Emory University School of Law in Atlanta, Georgia where she was elected to the Order of the Coif and served as Notes and Comments Editor of the Emory Law Journal.  Anna graduated from law school with distinction in 1989, and she began her career as an associate with Gibson, Dunn & Crutcher's Denver, Colorado office, working in their civil litigation department.  She has experience in corporate litigation, both large and small, as well as employment law, environmental law and bankruptcy.  After an extended, family-driven hiatus from practicing law (during which Anna raised a family, achieved a Master's Degree in Art History from the University of Colorado in Boulder, Colorado, taught art history at the college level, and managed a prominent contemporary art gallery in Denver), Anna and her family relocated back to her hometown of Fort Mill, just south of Charlotte, North Carolina.  In the summer of 2019, Anna joined Chet Rabon and his team as an associate, and she currently is licensed to practice in both North Carolina and Colorado.  Anna lives with her husband in Fort Mill, and their daughter currently is an undergraduate at the University of South Carolina.